Looking to boost your late model HEMI’s horsepower? Experience shows HEMI supercharger kits are the best power-per-dollar option for the HEMI engine. Stock 5.7 HEMIs see horsepower increases of 120 to 145 HP, 6.1 and 6.4 HEMIs can expect 160 + HP gains. Prices range from $5,500 to $7,900 for the supercharger kit, installation and tuning services are extra. Supercharger kits are sold as “Tuner Kits” and “Compete Kits”. Also, while most systems include a charge cooler (intercooler), some do not. Generally, lower priced kits include fewer components. Read the description carefully to be sure you are getting everything you need.

Complete Kits include everything you will need to upgrade your HEMI engine. You will get a supercharger, drive system, injectors, sensors, charge coolers, belts & hoses and a handheld tuner. If you are doing your own install, this is probably the option for you. If you are a DIY’er, you should have the WOT Air/Fuel ratio confirmed on a dyno after installation. It’s also a good idea to install a wideband air/fuel gauge that is easily visible to the driver. A boost gauge is strongly recommended; a fuel pressure gauge should also be considered.

Tuner Kits generally include the supercharger and a drive system. They lack some components such as fuel injectors and tuning devices. Tuner kits are typically sold to tuner shops and advanced users that have modified engines requiring larger injectors then are supplied with the “complete kit”. For example, if you’ve stroked your 6.4 to a 426 and plan on running 12 + pounds of boost you’ll need a tuner kit. You will also need to buy larger injectors and different pullies along with an upgraded fuel system. Custom dyno tuning will be required.

There are several companies that make supercharger kits for HEMI powered vehicles. Most focus on one of three methods for boosting air pressure; Eaton made TVS® “hybrid-Roots” blowers, Twin Screw compressors and Centrifugal compressors.

Eaton TVS (Twin Vortices Series®) style. Generally viewed as the best combination of superior drivability with significant power increases for the late model HEMI engine. Torque delivery is immediate, low and midrange power is exceptional and top end power is good. Developed by Eaton for OEMs, this system utilizes three and four lobe symmetrical rotors with a high helical twist; 120° to 170°. The major difference between the TVS and twin screw type superchargers, is that the TVS does not compress air in the blower housing. The TVS system “pumps” a fixed volume of air for each revolution of the rotor group. This causes pressure increases to occur in the intake manifold not the rotor housing. The result is lower charge air temperatures and higher potential rotor RPMs (up to 24,000), making it possible for large power increases with smaller rotor groups. Eaton reports horsepower numbers achieved by 2.3L TVS systems that are comparable to 2.8L and 3.3L twin screw systems. Because the rotors are symmetrical, they are affected by thermal expansion equally, allowing for tighter tolerances, better sealing, and significantly improved longevity. Two companies account for most TVS based HEMI supercharger kits; Edelbrock and Magnuson.

Twin Screw compressors. Generally favored for maximum effort applications. Torque delivery is immediate, and the curve is flat, top end power is very good. A screw or spiral-lobe compressor, is a positive displacement supercharger design that compresses air between two asymmetric, intermeshing helical lobes inside a rotor housing. Screw compressors were originally conceived by Heinrich Krigar in 1878 and further developed by Alf Lysholm for Svenska Rotor Maskiner AB (SRM) of Sweden in the 1930s. The technology was intended for use in gas and steam turbines and later replaced axial flow compressors found on fighter engines of the period. Lobe count / arrangement varies between manufactures, most commonly 3-5 and 4-6. Some companies use rotor groups manufactured in-house, others outsource this component. Currently two companies build twin-screw supercharger systems for the late model HEMI: Whipple and Kenne Bell. A verity of twin-screw displacements are available for HEMI powered vehicles, from 2.8L to 4.7L. Custom systems of up to 8.0L have been produced. 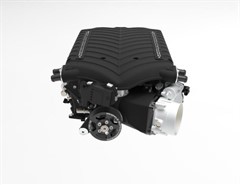 Hellcat Supercharger Upgrade
Is 707 HP not enough for you? Are you looking for a Hellcat supercharger upgrade that will take your HEMI powered super car to the next level? Hemituner Performance has you covered with supercharger pulleys, tensioners, new supercharger units, and much more!